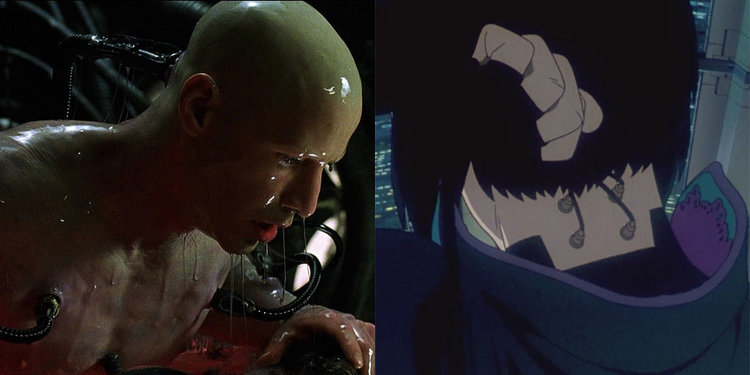 When I first began writing this article, it was just called ‘5 films inspired by movies you probably haven’t seen’, and then I realised all the examples I wanted to bring up were inspired by Japanese cinema. Weird, huh?

Well…. There really wasn’t more to this intro than that.

This is awkward now, isn’t it.

Let’s just get right to it. These are five films inspired by Japanese movies you probably haven’t seen.

Christopher Nolan’s dream-heist movie is rightly praised for its spiralling narrative intricacies and mind blowing revelations, but many of its ideas on how to visually represent the world of dreams aren’t entirely as original as you might think.

In the 2006 animated film Paprika, a thief steals a state-of-the-art machine through which one can enter the dreams of other people. The inventors of the machine, the police, and a mysterious girl named Paprika then race to catch the thief and end his reign of dream-chaos on the unsuspecting population of Japan. What follows is a cat and mouse game across different set pieces of mind boggling M.C. Escher-esque scenarios. Sound familiar?

Overall, the movies are quite different. Paprika has a very light hearted tone for most of its runtime and leans much heavier into surrealism and dream logic – as opposed to Inception, where most of the scenes involve slightly twisting a single aspect of the real world. Despite that, many of the most famous images from Inception were obviously inspired by the anime. While one can certainly see similarities on paper between the movies, it’s really most apparent when looking at the images Paprika uses to transport us into the human mind. Take a look at these examples.

Christopher Nolan has never listed Paprika as an inspiration for his movie. But looking at these examples, and considering the fact that Paprika’s creator Satoshi Kon passed away shortly after Inception’s premiere in cinemas, it would be fair to say that he deserves some credit for inspiring Nolan. That being said, while Inception isn’t the epitome of originality many make it out to be, it is absolutely a movie to be treasured and definitely falls on the side of homage rather than rip-off.

#2 The Matrix / Ghost in the Shell

When stepping up to the plate to direct The Matrix, the Wachowskis said, from the start, that their vision was to translate Japanese anime to live-action. The movie they made is generally inspired by manga and anime in the way it’s shot, and the kinds of concepts it deals with. But when looking at the film’s countless influences, none stand out more than the 1995 sci-fi piece Ghost in the Shell.

On a surface level, there are almost too many inspirations to count, even from the first frame of the film. For one, both movies start with a green matrix of cyphers and numbers scrolling in different directions on the screen. Both movies feature extravagant action that’s only possible with wires in real life. Both movies have famous action scenes where hails of bullets shoot the shit out of blank, black walls. They way the characters dress is similar. Both movies take place predominantly in slick, dark cityscapes. Basically, what I’m saying is that visually, they are strikingly similar in some respects.

On a deeper level, they both bring up similar philosophical questions but in different ways. The Matrix and Ghost in the Shell ask what it really means to be human in a dystopian future. The story of GitS concerns a cyborg who pretty much goes through an existential crisis while hunting a hacker terrorist villain guy called the Puppet Master. The story of The Matrix concerns a hacker who has a literal existential crisis while hunting a superhuman AI. You see my point.

Both are great, but I’m assuming you’ve seen The Matrix, so consider this a strong recommendation of Ghost in the Shell (1995)

Alright. Obviously, Kill Bill is heavily inspired by tonnes of movies. Every single scene in that film is a carefully constructed amalgam of other things, twisted just enough to be original. And that’s just fine. In fact, that’s what it’s all about (it, in this case being filmmaking). I simply wanted to take this chance to point you all to one of the coolest, most underrated action movies of all time: Lady Snowblood. Quentin Tarantino pointed this movie out to the movie-going public himself, so it’s safe to say he wants to do the exact same thing.

On both stylistic and storytelling bases, the two share quite the number of things. Everything from certain shots being clear homages, to clothing, to music. And speaking of the music, that’s where perhaps the most fun tip of the hat comes in. Meiko Kaji, the actress who plays the titular heroine of the 1973 film, has multiple soundtrack features on Kill Bill. You can hear her haunting voice on the songs Flower of Carnage and Urami Bushi. The former is played during the fight with O-Ren Ishii, whose snowy courtyard is taken straight from the climactic sword battle in Snowblood. It’s dope as hell.

It’s worth looking into the inspirations that go into each and every Tarantino film. Except for Martin Scorsese and a select few others, there is no one as literate in the history of cinema as QT. He knows everything there is to know about every movie it’s worth knowing anything about. Say that three times fast. So next time you watch one, search up what inspired it. I’ve found a few of my favourite movies that way.

Apropos both Quentin and favourite movies, this next franchise is directly inspired by what he claimed was his favourite movie of all time. In case you’re unable to read text when the font is bold, the franchise is The Hunger Games, the source of inspiration being Battle Royale, a japanese flick from the year of our Lord 2000. And in an interview where QT put together a list of favourites, he claimed it was his favourite film to come out in the last 25 years.

Dystopian futures where an oppressive government toss children into a massive arena and force them kill each other. I remember Hunger Games causing quite the controversy when the movie dropped, some people calling for an NC-17 rating even though the violence in the books was avoided thanks to a camera man who seemed to suddenly try and swat wasps with the camera any time a child was in danger.

In Japan they don’t play by the same rules. The movie is violent as all flying h*ck, but that didn’t stop it from being a box office success, and although plagued by controversy since day one, it’s developed a dedicated cult following across the globe, amassing a huge group of fans.

Now, then, what about this Hunger Games-business? An American remake of Battle Royale was reportedly in development in the years after the original came out, with rights to the movie being obtained in 2006. The Hunger Games novel was published in 2008 and immediately there were talks of a Hollywood adaptation. Since the Hunger Games brand was more marketable and had the potential of reaching a much wider audience, the movie began production fairly quickly, which killed all aspirations of an American Battle Royale. Producer Robert Lee, who had spearheaded the American version of BR said in an interview, “Audiences would see it as just a copy of [Hunger] Games – most of them wouldn’t know that ‘Battle Royale’ came first. It’s unfair, but that’s reality”.

All right, let’s open up this can of worms. If you haven’t heard about this, it’s understandable. Kimba is a Japanese IP that’s been around since the 1950s in the form of a manga comic called King of the Jungle, created by Osamu Tezuka.

King of the Jungle follows Simba… oops, sorry, that was a typo; Kimba, an orphaned white lion who has to reclaim a kingdom after his father’s death. Kimba was, and is still, to an extent, a highly successful property in Japan but it hasn’t received much recognition in the rest of the world. Other than a manga, there are multiple animated series (the first dating back to 1965) and a couple movies. Tezuka, who was also the creator of the more famous character Astro Boy, often said he was heavily inspired by Disney, but the Mouse wasn’t as keen on reciprocation.

The Lion King, released to widespread and deserved acclaim in 1994, has too many similarities to Kimba: The White Lion to count. Here is a video that at the 3:11 mark puts together a visual comparison. However, as we’ve seen from the rest of this list, there is absolutely nothing wrong with borrowing visual elements from another, pre-existing piece of work. The problem comes from Disney’s handling of the situation.

If you’re like me, you hadn’t for the longest time heard of Kimba. Disney has never officially acknowledged the influence and obvious similarity between the two. In fact, at the time of its release The Lion King was decidedly pushed as Disney’s first entirely original film.

And you might think that’s fine. There’s no rulebook stating you have to admit influence or point people toward something that inspired you. It’s a nice gesture, but it’s nothing required. But it gets worse.

Osamu Tezuka died in 1989, and thus began a large-scale production of a Kimba film adaptation, called Lion Emperor Leo. The production faced some difficulties so the film didn’t premiere until 1997, and that’s when things got really shady. Disney fired a Cease & Desist at the Japanese studio, in essence calling Kimba a rip-off of Simba.

That seems like bullshit, but what if it really only was a coincidence? What if no one on the team had heard of Kimba? Well… Allow me to point you to this quote from Matthew Broderick, who voiced Simba in The Lion King: “I thought he meant Kimba, who was a white lion in a cartoon when I was a little kid. So I kept telling everyone I was playing Kimba.”